Chasing Galileo: Capitol astronautical engineering students contribute to expand the definition of what we can see

The first telescope used for space exploration was made and used by Galileo Galilei in the year 1610. In a time where much of society knew nothing of galaxies and believed that the universe was geocentric, Galileo used his telescope to discover that Saturn had rings, that the Milky Way was not a cloud, but a large cluster of stars, and that Jupiter had moons. 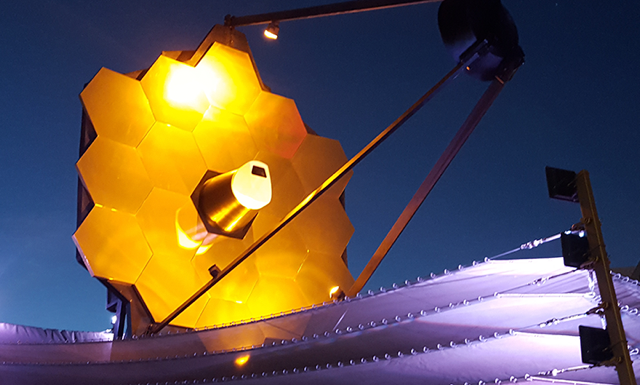 Twentieth century telescopes like the large one used by Edwin Hubble in the 1920s allowed astronomers to discover the existence of galaxies beyond our own. Leaping even further, the Hubble Space telescope, named after Edwin Hubble, was the first major optical telescope to be placed in space.

According to NASA, Hubble launched in the year 1990 from the space shuttle Discovery, and has made more than 1.3 million observations since the beginning of its mission. It has given scientists a look back into the past at locations more than 13.4 billion light years from Earth. These and other observations made by Hubble have led to more than 15,000 published scientific papers.

The next generation of space telescopes is just around the corner.

The James Webb Space Telescope (JWST) is NASA’s latest revolutionary project that shows just how much telescope technology has evolved. And Capitol astronautical engineering students and alumni are helping to get it off the ground at the Goddard Space Flight Center in Greenbelt, Maryland.

“The capabilities of this telescope are incredible,” said Capitol 2015 graduate Aaron Bush, now a spacecraft engineer at the Space Telescope Science Institute (STScI). “They’re much greater than what Hubble has been able to bring – and Hubble has brought us so many wonders. This is going to be above and beyond,” he said.

Bush is working on the communications subsystem, thermal testing, and the Optical Telescope Element (OTE) for the Webb. “I do everything from writing code, to writing procedures, to conducting exercises to helping the flight operations team prepare for when the spacecraft actually launches.”

Fellow alum Carl Hansen, meanwhile, is a ground systems engineer for the mission. “It’s my job to develop products that will be used during flight, to allow our ground stations to talk to the JWST. After it launches, my job will be to watch those products very carefully and make sure they are doing what they’re supposed to do.”

The JWST’s job is to study the way our universe was formed using innovative new telescope technology that can capture light in a way it has never before been studied. “The Webb is an orbiting infrared observatory that will complement and extend discoveries of the Hubble Space Telescope, with longer wavelength coverage and greatly improved sensitivity. The longer wavelengths enable Webb to look much closer to the beginning of time and to hunt for the unobserved formation of the first galaxies, as well as to look inside dust clouds where stars and planetary systems are forming today” says NASA’s facts page.

“This is one of NASA’s biggest missions,” Hansen said. “To have the chance to work on something that is so monumental is a huge honor.”

We’ve come a long way from Galileo’s time. In just a year, NASA and our Capitol graduates could be launching a telescope that will give us a glimpse into the very formation of the universe as we know it.