Once, majestic and gigantic dinosaurs roamed every continent. Then they died -- and now, in museums, engineers have to figure out how the heck to hold up their massive skeletons. It turns out the technology of exhibiting tons of dinosaur bones in an engaging 3D way is itself a field of innovation. Today, we look at the dinosaur exhibit engineer.

A little background -- the Smithsonian Museum of Natural History just (on June 8, 2019) opened its new Deep Time Fossil Hall exhibit, 7 years in the making. While dinosaurs don't do engineering (anymore), there's a surprising amount of engineering involved in creating museum exhibits. The DeepTime exhibit (officially the David H. Koch Hall of Fossils) is 31,000 square feet of over 700 fossils, made possible by gifts and donations totaling $110 million.  Fossils are the museum's #1 draft, with 5-6 million people visiting annually.

Given the stakes here, Siobhan Starrs (the lead exhibition project manager) notes the construction management issues in creating a 3D exhibit space in what was once known (back in 1931) as the “Hall of Extinct Monsters.” The building columns require steel rebar because the mass of bones is greater than the floor can support. Model and armature designers create articulated poses such as feeding or combat. Even electrical and power engineers must step in to update the 1940-era power system for more watts per square foot and lay raceways to provide both power and data cabling for the exhibits.

The vegetarian Camarasaurus display is the only rearing, feeding dinosaur display in the world made of actual bones. The long-necked, plant-eating Diplodocus has its elongated neck stretching out over the walkway. And carnivore Stegosaurus is the only vertically-mounted Stegosaurus in the world. Oh, and they have a T-Rex too, but in terms of engineering, look at those 3 Jurassic period dinosaurs. 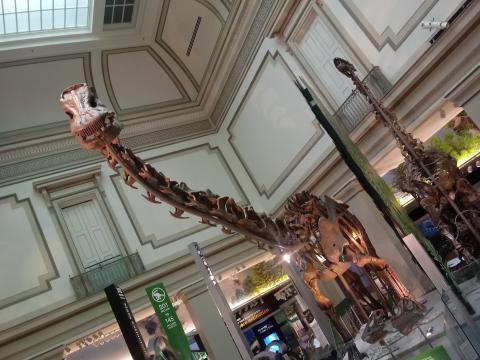 With a giant rearing dino, a long-necked one arching above the exhibit, the vertical Steggie -- plus a pair of dinosaur skeletons shown locked in combat, fan-fav T-Rex, and all the cool aquatic ones -- well, from a science point of view, I'm sure there's good stuff, but from an engineering point of view, the difficulty in making an essentially transparent framework to convey realism is awe-inspiring. The vertically mounted Steggie, for example, is an “exploded view” of a find placed right at eye level rather than buried flat on the ground. It requires armature going through it and no display case or floor mount for support.

All the trades were involved-- structural engineers, mechanical, security, fire safety, electrical. Mounting the dinosaurs was an engineering challenge, and one where the trades have to meet the arts, and (as Siobhan notes) the two must come together. Career-wise, the engineers weren't just hired for this one hall, rather, the Smithsonian (as a whole, comprised of 17 museums and galleries just in the DC area alone) maintains its own engineering corp. Being a Museum Engineer isn't a degree, but a career title one must earn.

Our students get engineering degrees in astronautics, cyber, computers, construction, electrical, and mechatronics (among others). Most go into industry and space and defense. But it's nice to know that some of these bright young engineers someday may get a job connecting with millions of years of history in creating the next generation of cool dinosaur displays!