Cross-disciplinary collaboration will become increasingly important for electrical engineers in the future, especially as innovators seek out new materials with which to build chips and other components, believes Dr. Nayef Abu-Ageel. A researcher, teacher and entrepreneur with more than fifteen years of academic and industrial experience, he recently joined the Capitol faculty as chair of the electrical engineering department. 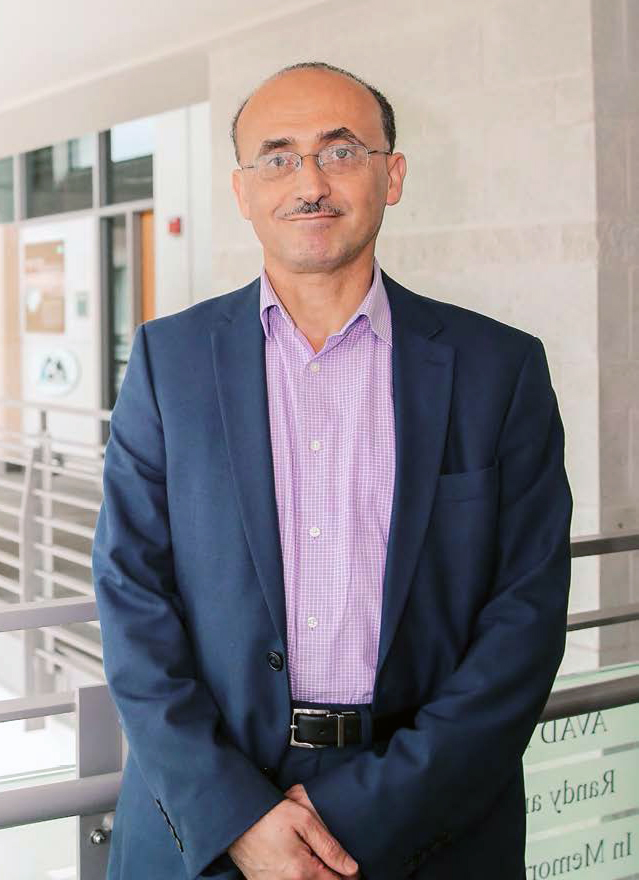 From 2000 to 2001, he was a manager at a Massachusetts high tech startup that was acquired for $1.4 billion. More recently, he served as an adjunct professor at George Mason, where he worked to integrate entrepreneurship into class material and involve engineering students with the local community through designing and delivering a series of mini-workshops for local K-12 students.

Dr. Abu-Ageel’s research focuses on the development of optoelectronic devices for telecom and display applications. His patents and publications in the field of information displays have produced 171 citations.

Capitology spoke with Dr. Abu-Ageel about his vision for the electrical engineering program at Capitol and his perspective on the changing higher education arena.

What appeals to you about Capitol Technology University?

It’s a very collaborative environment. People work in teams across different disciplines and that’s great. I sensed from my first contact with the people here that there aren’t so many barriers between programs and disciplines, for example between computer science, cybersecurity, engineering and business. We are able to communicate across these disciplines in a very real and constructive way.

What is your vision for the electrical engineering program?

Firstly, we need to keep a close eye on what the local industry needs. If there’s something we don’t have yet we can implement it, or if what we have already needs to be tailored, based on new technologies or new needs, we should do that too. That’s one thing.

At the same time, it's important to look across, for instance by developing programs that bridge electrical engineering and business.

More generally, we have to understand and be able to respond to the radical changes that are going on in education. The profession is in a transformational phase. Education ten years from now might be very different from today’s education, and we need to figure out where we fit in and how to respond. There's a storm coming in, so to speak, and it's massive. Institutions that don't anticipate or respond effectively to this storm are in danger of being wiped out.

What do you see as some of the key areas of transformation?

Models in which education is expensive are not going to stay. It's very expensive, for instance, to have fixed classrooms and fixed laboratories. That's why schools are increasingly looking for ways to take advantage of the online resources that are available.

At the same time, for students to be very competitive in the 21st century, they cannot be taught in the old-fashioned way -- that is, where you bring them into a certain setting and teach them certain information, and they memorize it, get tested on it, and are out the door. The new model is going to be about projects. That can mean, for example, a single big project that a group of students works on throughout their program years, learning whatever they need for that project. Often, faculty will be serving more as a guide, assisting them with the learning process, than as a teacher in the traditional sense. When the students graduate, they will already be well integrated into the industry. They will know what they want to do and they will have the skills to do it.

Another thing to consider is globalization. Students who have travelled or lived abroad, or have had international exposure in some way, have a broader vision and an understanding of how a global society works. The global society is already here and it impacts the lives of many people. Educators have the responsibility of helping students gain the global perspective they need, including in fields such as engineering.

How can electrical engineers be part of business analytics?

In business analytics, you have the question “how can you analyze big amounts of data?”  You need to understand how to collect the data, store it somewhere and then analyze it. The entire process is founded on innovations in computer science, which in turn are related to electrical and computer engineering. Furthermore, what data analysts do is look for patterns. They can benefit from interaction with specialists in other fields -- including engineers -- who have been trained to recognize and understand certain patterns.

What changes do you see in the future?

The foundation for all electrical engineering is material science and engineering. The revolution in the 20th century was based on silicon, and that’s what we have in our cell phones and computers. Now, in the 21st century we have another advancement -- that is, people are working with many new materials, which could eventually replace silicon. Electrical engineering plays a role there. Once you have a new material you also have new things that can be done with that material -- for example, a new transistor based on graphene or nanotechnology -- and you have new applications that come out of that. Electrical engineering can really come into play there.

Someday we could create a computer that’s built totally on light. Rather than manipulating electrons, we could manipulate photons. In that case, the role of electrical engineering is integrated with other disciplines. Indeed, in the future, the field itself will be morphing into something new.

At the same time, engineering in general has penetrated our lives in a deeper way, to the point that young children are experimenting with it. The range of applications and uses has burgeoned, in the medical arena, for example. We've entered a phase in which it's becoming universal in our society; yet, the public at large doesn't understand it very well. We need to educate people more widely and provide the base they need, considering the extent to which engineering is becoming integrated into daily life in an unprecedented way.

What do you enjoy most about teaching?

Inspiring people about new things, either about technology or about building their own startups, inspiring them about making a change, either in their lives or those of others.