For most students, taking a final exam means poring over a test – solving problems, answering questions, and doing your best to summon forth the knowledge you obtained during the semester. What if you took a final that included commanding and controlling a spacecraft?

For Capitol students enrolled in Ground Systems Engineering, part of the school’s astronautical engineering curriculum, the exam included exactly this kind of challenge. The course incorporates a dynamic flight simulator provided by The Hammers Company and housed in the university’s Space Flight Operations Center (SFOTC).

To wrap up the course, students were grouped into four-person teams and put in command of two virtual spacecraft over a three-day period. They were provided station contact times and had to ensure that a member was on console to uplink command sequences to turn on spacecraft telemetry, downlink engineering data and verify the health and safety of the spacecraft. 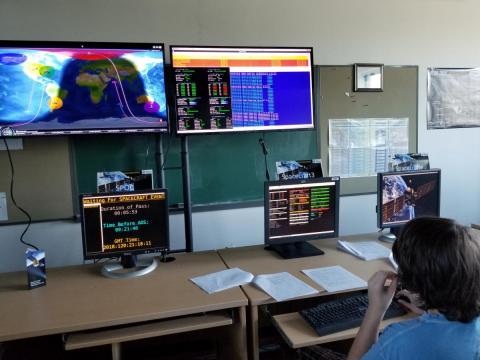 Use of virtual spacecraft allows students to gain real-time training, but without risking damage to actual, billion-dollar equipment, says Marcel Mabson, who co-teaches the course with another Capitol professor, Rishabh Maharaja.

“From the operator’s standpoint, when you’re on the system, it looks exactly like the spacecraft,” explains Mabson.

To up the challenge – and provide practice in dealing with the kind of anomalies that occur in actual missions – the two professors introduced a number of problems and errors, including loss of telemetry due to a misconfigured command sequence, as well as loss of command over the spacecraft. During each event students had to use lessons learned during class lecture and labs to recover the spacecraft and restore spacecraft telemetry and command capabilities.

“Both student teams successfully met all objectives and are now preparing for part two of the final,” Mabson said. “This was the 1st time the SFOTC was used in this manner. The students enjoyed the experience and developed skills that will carry them to careers in mission operations.”