Commencement Day - Congratulations to the Class of 2019!

On a warm cloudy day in Laurel, Maryland, almost two hundred scholars donned long black robes, cords, and – for some – elaborately decorated caps. They lined the halls of Capitol Technology University waiting in excited anticipation for their long walk to the stage. Some of them, who had earned their degree entirely online, were meeting in person for the first time. Event coordinators walking the hall could hear the excited chatting of old friends eagerly putting a face to the names of classmates they had come to know well over years spent together in virtual classrooms. The undergraduate students could barely contain their energy as they bounced up and down on the balls of their feet, unable to stand still except to grab a quick selfie with their friends. And then they were walking. 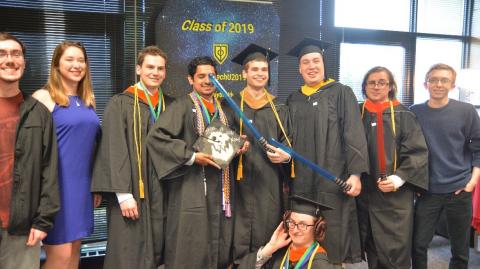 They walked down the stairs of the old building many of them had built friendships in, learned lessons in, made a lifetime of memories in. Past the flags of their states and countries that lined the pretty green drive as the Chesapeake Brass Authority began to play their song: pomp and circumstance.

Two by two the announcer called out their degree names as they entered the tent, flanked by paparazzi made up of over a thousand friends and family members who had come out to see their graduation day this May 4th, 2019. The marshal greeted them, the president congratulated them, and awards were given out.

This year Sophia LoSchiavo and Myleek Chase each won a distinguished student service award for their many contributions to the university and to the class of 2019. Junior and cybersecurity major, Jacob Karnes was named the 2019-2020 Avrum Gudelsky Scholar. AE Professor Marcel Mabson won the service to students award, EE/CE professor Dr. Garima Bajwa won the teaching award, and AE Department Chair, professor Angela Walters won the research award.

Capitol was so excited to this year welcome comic distribution icon, Stephen A. Geppi, Sr., CEO of Diamond Comic Distributors, Inc. as our graduation speaker. Diamond Comic Distributors is currently the world’s largest distributer of English-language comics and is the exclusive distributor for big names like DC, Marvel, Dark Horse, and Image. A Baltimore, Maryland local, Mr. Geppi built his business from the ground up. 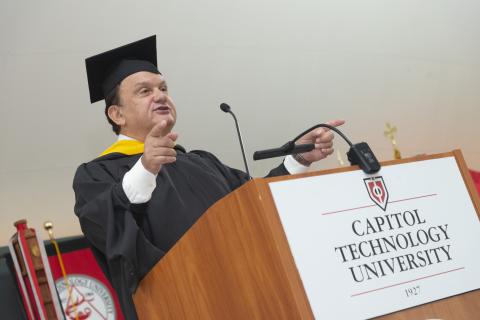 “May the 4th,” began Mr. Geppi, “we know why we’re here my fellow geeks and nerds. It’s a big day. We’ve got Star Wars day, a big day in my industry: free comic book day, it’s the Kentucky Derby – where I was supposed to be today actually but I thought that this was a much better choice. Most important of all, it’s your big day and you put in many, many years of schooling, studying late, and comradery with one another, and here you are. You finally got here. And what a great place it is to be today. Congratulations to you.”

Mr. Geppi spoke only a few minutes, but he made every one of them count as he let us in on his own story of education and perseverance, “My story’s a little different. It’s kind of ironic that a guy who dropped out of school in the 9th grade is up here giving a commencement speech. I have to tell you that it’s quite an honor and what it should tell you is that anything is possible. That’s a theme I want you to remember because getting your degree today is very important, but that road is just starting. You’ve got so much ahead of you.”

Mr. Geppi reminded graduates to listen to others, to trust in themselves and in their loved ones, and to take their failures as lessons, “You know the secret to success is really failure. Don’t give up when something goes wrong and you get discouraged. Keep that positive but realistic attitude because as I said, nothing is impossible.”

Degrees were awarded and Mr. Geppi was correct, family, friends, loved ones, and all of us at Capitol couldn’t have been more proud of our graduates. Congratulations to the class of 2019! We’ll leave you with Mr. Geppi’s sign off here, as we couldn’t have said it better: “Thank you for inspiring me, for giving me the opportunity as a kid that didn’t get to go to school, who was fortunate enough to work hard and do something with my life and give back – because that’s what our real purpose is... May the 4th be with you!”

The crowd cheered as the students marched into their future to the sound of the iconic Star Wars theme.