In Memory of Gabriel A. Battista: Beloved Supporter of Capitol, its Students, and Education

The Capitol Technology University community is deeply saddened by the passing of Gabriel A. Battista, whose dedication to education inspired many at the University and around the world. 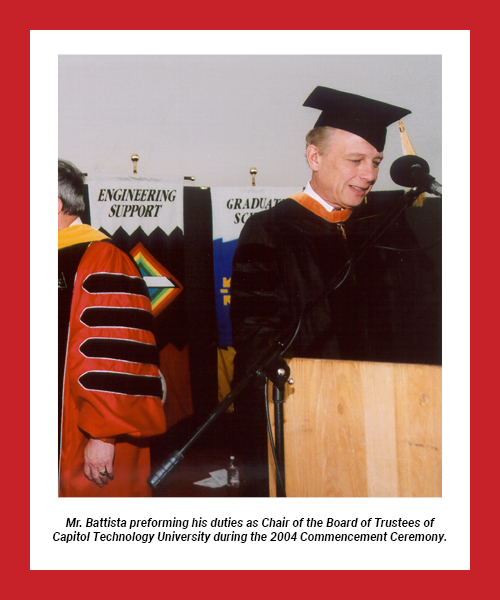 Many past and current leaders of Capitol Technology who worked with and admired Mr. Battista reached out to reflect on the University’s long-time supporter.

“He quickly became a vital member of the board during a time when the institution undertook many bold steps in its development.  He understood and admired what the University was accomplishing and its courageous embrace of the future,” Dr. Troxler said before adding that Mr. Battista was an eager and effective board member whom he often used as a sounding board for ideas.  “His insight into complex, multi-year strategic plans was priceless. Everyone who knew Gabe has lost a great friend.  I have also lost a colleague, a mentor and an inspiration.”

Dr. Michael Wood, former president of Capitol from 2004 to 2017, echoed Dr. Troxler’s sentiment saying Mr. Battista “was a great friend and mentor as our Board Chair.”

Haden Land, current Chairman of Capitol’s Board, and J. Kelly Brown, Jr., Treasurer and Co-Chair of Board, also shared their thoughts on the incredible loss they feel as fellow Board members and friends.

Land described Mr. Battista as “a wonderful gentleman and strong supporter of the University” while Brown said “his leadership and dedication to Capitol was awesome” and that “it was an honor to serve with Gabe on the Board.”

After working for General Electric, Mr. Battista honed his leadership and business skills as the president of Sprint’s Eastern Group; president and North American CEO of Cable & Wireless, Inc.; CEO of Network Solutions; and finally as the president, chairman, and CEO of Talk America.

Mr. Battista shared his valuable career and life experience with the 2001 graduating class as the Commencement speaker on Saturday, May 12 2001.

In this speech, Mr. Battista impressed the importance of pairing diligent work with fun in all endeavors, but especially in the graduates’ chosen careers. Mr. Battista explained ten axioms which helped balance these two important mindsets: learn the rules of your chosen profession; create a plan with objectives to help you reach goals; maintain and improve your skills; learn to read your coworkers; play to win as an individual and as a team; learn from your mistakes; anticipate and plan for change; ask questions when clarity is needed; find a mentor; and act courageously.

For Mr. Battista, the last axiom—act courageously—was his most important advice.

“I can tell you, there are lots of people in the high-tech field and on Wall Street today, who neglected to act courageously and with common sense in their work lives. As you well know - they steered many companies and investors in the wrong direction,” said Mr. Battista. “I'm not saying that acting courageously is an easy thing to do. It may make you nervous. It may make you sweat. But in the end- to quote Teddy Roosevelt – ‘Far better it is to dare mighty.’” Even after Mr. Battista’s retirement, he continued to serve and provide generous denotations to organizations in which he believed.

As a testament to Mr. Battista’s commitment to education, he donated funds to establish the Battista Scholarship for Capitol Technology University students. The annual scholarship has benefited 13 students since 2004 through Mr. Battista’s generous donations totaling $26,000 for scholarship funding. In addition to the scholarship program funded by Mr. Battista, he also provided significant personal support to the university’s campaigns for the John G. and Beverly A. Puente Library and the McGowan Academic Center.

In addition to Mr. Battista’s substantial contributions to Capitol, he also served as Chairman of The American University of Rome and Chairperson of the National Italian American Foundation. He was also a member of the board of directors for Sentrillion Inc., TEOCO, a software company, and the Network Alliance.

Capitol Technology University thanks Mr. Battista for all his contributions to the success of the institution and its students. Mr. Battista’s generosity and commitment will not be forgotten.