To enhance the research and study potential of our highly sought-after Aviation and Astronautical Science degrees, Capitol Technology University applied for a grant to support the construction of an on-campus space observatory. In January 2022, that grant was awarded by the Maryland Space Grant Consortium, and installation of the new ALPHA Observatory began. Now, students are able to work hands-on with state-of-the-art observatory equipment, study Near-Earth Objects (NEOs), and produce informative data that directly contributes to current NASA research, thus paving the way for their successful careers in this exciting field.

The Asteroid Large aperture PHotometry exoplAnet transit (ALPHA) observatory is comprised of a complete NexDome system housing an 11-inch Celestron Optical Tube Assembly (OTA) mounted on an equational mount. It is located on-campus in an open field near the entrance of the university.

What Can ALPHA Do?

The ALPHA Observatory is capable of monitoring between 50 to 100 objects per night, including variable stars, exoplanet transits, and newly discovered type I and type II supernovae. It will continue NASA’s planetary defense mandate by performing observations of Near-Earth Objects (NEOs) such as comets, meteoroids, and asteroids, to characterize their orbits and potential impacts to Earth.

How Does ALPHA Work?

The majority of NEO objects are undetectable by the naked eye and require a telescope with a large aperture to resolve the object. The ALPHA observatory uses an 11-inch Celestron telescope configured for F/2 observations mounted on an equatorial mount. The complete system, including the space telescope, cooled CMOS camera, computer networks, and weather monitoring is housed in a NexDome observatory structure. Observing NEOs requires the system to monitor a portion of the night sky by taking short 30-second exposures over 5-minute intervals. During this process, background objects such as stars and galaxies will not move against the sky, but foreground objects such as asteroids will move. By observing these movements, ALPHA is able to generate orbit predications, measure rotational periods, and measure the speed of each NEO object. Depending on the target, ALPHA can capture approximately 10 - 20 minutes’ worth of data before moving to the next object.

ALPHA references the Minor Planet Center (MPC), which provides ephemeris data for all discovered and/or unclassified NEO objects, to retrieve and send the latest positional data of known and recently discovered objects. After successfully observing and submitting positional data on over 17 objects to the MPC, ALPHA was provided with its official MPC observatory code: W58. This acknowledgment from MPC validates ALPHA's ability to track objects within tolerance and ALPHA officially began its nightly sky survey program.

How Do Students Use ALPHA?

Students use current research to plan observation targets and then load these plans into ALPHA. This plan will detail target position, exposure time, focus parameters, observation pause conditions and observation ending times. Once transferred to ALPHA and observations begin, ALPHA located and targets each object automatically. During observations, students have the ability to remote into ALPHA to monitor its status and retrieve data. The ALPHA observatory provides the AE program with a unique opportunity to contribute to scientific research and improve the overall understanding of NEO objects. Having access to real-world objects to perform orbit determination provides AE program students with invaluable experience that will benefit them not only in the classroom setting, but also with future employment opportunities.

Capitol Tech will be hosting opportunities for students, the public, and other interested parties to participate in their "Night with ALPHA" streaming events. Events will be announced on our social media and past recordings will be posted to our YouTube channel.

TBD - Stay tuned on our social media for upcoming events.

View our YouTube channel for full listing of recorded events. 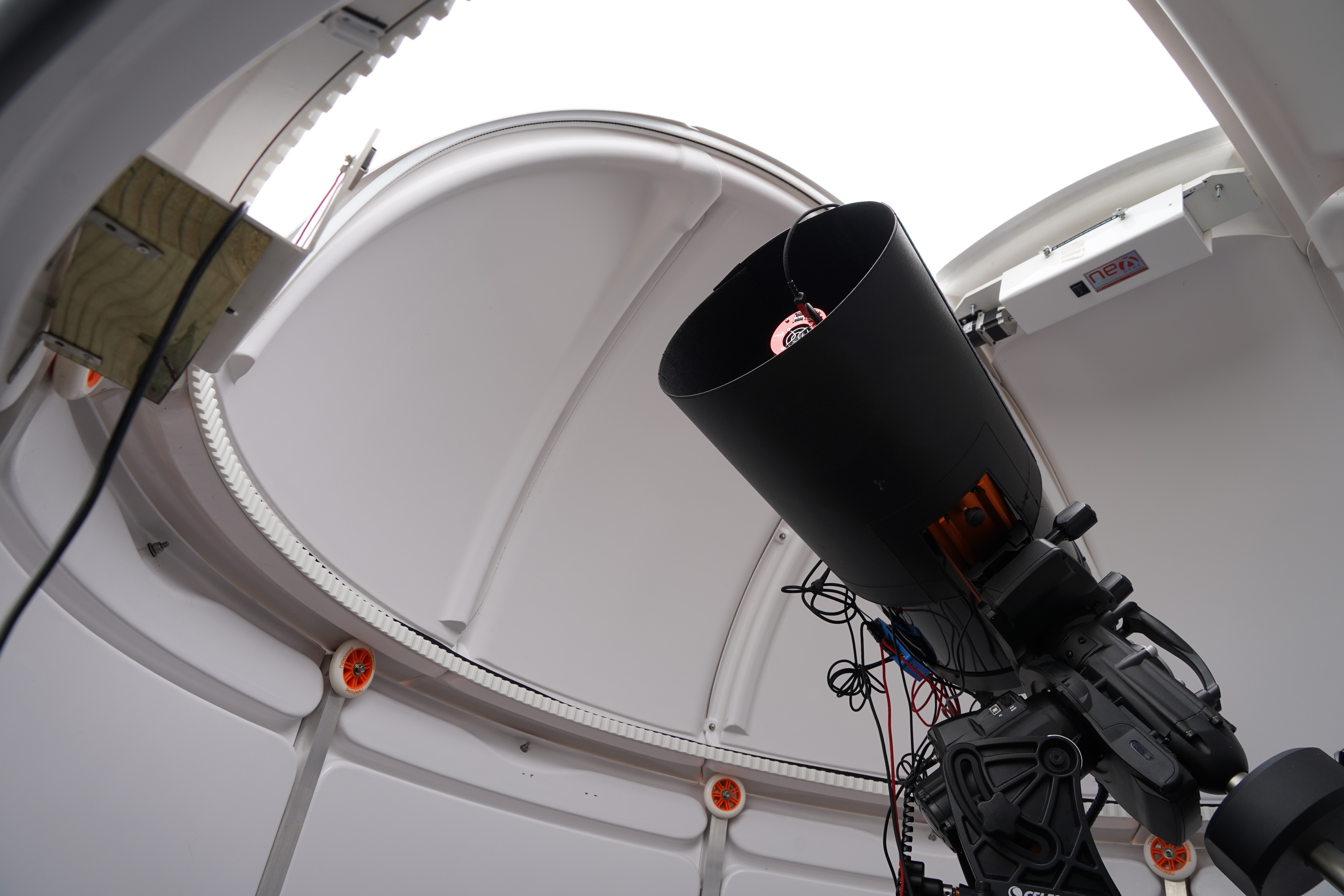 This image of the moon was captured by ALPHA. The waxing crescent phase is when the illuminated side of the moon increases from 0.1% to 49.9%.

This image of the moon was captured by ALPHA. The last or third quarter phase is when the illuminated side of the moon is exactly 50% of the moon's surface.

This image of the moon was captured by ALPHA. The waning crescent phase is when the illuminated side of the moon decreases from 49.9% to 0.1%. This phase lasts until it disappears from view during new moon phase.

This image of the moon was captured by ALPHA. The full moon is when the sun and the moon are aligned on opposite sides of earth, and 100% of the moon's face is illuminated.

An inside view of ALPHA's dome and telescope.

An aerial view of ALPHA via drone.

A nighttime view of ALPHA against the sunset sky during our campus tour video shoot.

A display of the Auto Observation Tool within ALPHA's software.

A display of the ALPHA Workstation tracking test with all screens shown.

A display of the Dome Control screen within ALPHA's software.

M13: The Great Hercules Cluster, in the constellation Hercules. This final image comprises over 1.5 hours of total image integration, which was made from over 400 individual images over a 3.5-hour window.

NGC-457 (The Owl Cluster), located in the constellation Cassiopeia and found within the Milky Way, which makes for a very dense star field. NGC-457 is a young cluster, only 21 million years old at 7900 light-years distance.

Comet C2017K2 at a distance of 270 million km from Earth. The comet is ~11 miles in size in an "outburst" state, or ejecting material from its icy core.

To read our collection of ALPHA articles, click below: