A Capitol student received some game-changing news this past semester: he’ll be completing the remainder of his studies tuition-free, with an additional stipend to cover room and board, and guaranteed employment after he receives his degree. 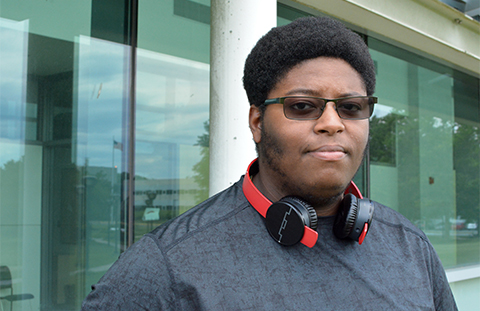 Joshua Joseph, who is double-majoring in computer science and cybersecurity, has been accepted into the Department of Defense’s Science, Mathematics And Research for Transformation (SMART) Scholarship for Service program, established in 2005 with the goal of attracting some of the best and brightest talents in science, technology, engineering, and math (STEM).

“I’m excited,” Joseph said of the award. “It will have a big impact, particularly in terms of easing my family’s financial burden. SMART pays for all your tuition, as well as your health insurance. It provides a stipend of between $25K and $35K a year for room, board and fees. You also receive a guaranteed internship over the summer, and guaranteed work after you graduate.”

The SMART program, according to its official website, aims “to increase the number of civilian scientists and engineers working at DoD facilities.”  It is highly selective, with recipients earning an average GPA of over 3.7.

Joseph, who is going into his senior year, is no stranger to academic achievement, having excelled first in high school and then at Capitol. Meanwhile, he has also been active on campus, volunteering at the university’s Cyber Lab and, more recently, its newly-launched Brain-Machine Interface research center.

“I’m very interested in artificial intelligence,” he says of the latter project. “It’s something I’d like to explore further in graduate school.”

The decision to double-major came about through his involvement in the Cyber Lab, where he is now a lab manager. “I came here to study computer science, but from my first week at Capitol I started volunteering at the lab. I already had a cybersecurity background going back to high school and had done an internship in the field. As I showed [cybersecurity] professors William Butler and Rick Hansen that I knew certain things, they suggested that I add cyber as my dual major,” he explained.

With both of his majors, there are particular areas of focus that appeal to him.

“In terms of cyber, I like malware analysis,” Joseph says. “Just being able to identify different kinds of malware, then analyze it and see what it’s capable of and what it does under certain conditions – it’s really intriguing. Malware can behave almost like a life form. And malware analysis relates to my interest in artificial intelligence.”

“As for computer science, I just like coding. It’s fun, and there’s a lot of utility to it.”

SMART is among several DoD-sponsored educational initiatives that operate through the National Defense Education Program, with funding through the Office of the Secretary of Defense. The opportunity to apply to the program is offered annually to “students who have demonstrated ability and aptitude for excelling in STEM fields in disciplines of importance to DoD,” according to the official website.