Want to launch a satellite into orbit? Fly it on a high-altitude balloon first!

At Capitol Technology University, enterprising students collaborate on projects they hope will someday be launched into space. And, for many, that dream has come true. 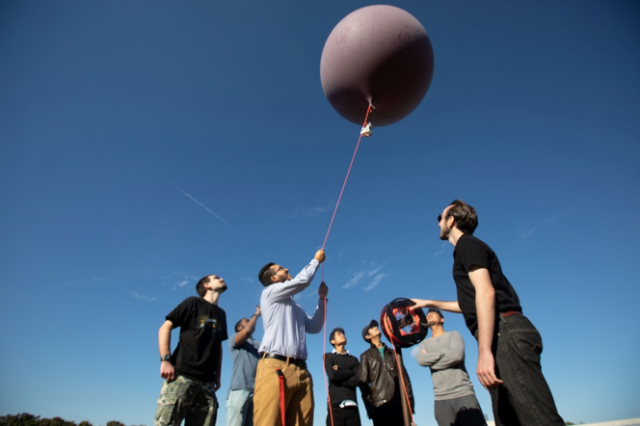 Successive student teams have attended NASA’s Rock-On! Workshop and Rock-Sat X Program, gaining an opportunity to have their project payloads launched aboard NASA sounding rockets. For some, the journey is continuing even further: Capitol Tech projects were selected for the CubeSat Launch Initiative, with an expected launch date in 2019. Another student endeavor, Project Aether, is set for a rocket launch out of Norway as part of the Grand Challenge Initiative.

Long before reaching that stage, however, these projects will already have been flown to less celestial – but still impressive – heights via a high-altitude balloon flight. It’s all part of a process dubbed “Crawl, Walk, Run, Fly!”

That’s a picturesque way of describing a standardized development cycle that takes projects from inception to completion, transforming concepts into real-life payloads that ultimately go into orbit high above earth. Students begin by fleshing out their ideas in the form of a mission statement and defined goals and objectives. They design and build prototypes, then begin a series of tests on high-altitude “BalloonSats.”

Once they are confident of success, they move to NASA-accredited tests and sounding rocket flights. For many projects, the ultimate goal is a full orbital mission.

The use of BalloonSats to test payloads was pioneered by theNational Space Grant College and Fellowship Program, commonly known as Space Grant, starting in 2000. The program encompasses universities and colleges across all 50 states; Capitol Tech collaborates with the Maryland Space Grant Consortiumfor its balloon tests.

High altitude balloon flights simulate some of the conditions that a payload will experience on a rocket launch. Moreover, they train students in adapting their projects to meet specifications and requirements. Due to the lightweight airframes used on these flights, teams are often presented with weight and volume constraints – and must find a way to work around them.

It’s good preparation for the rigorous review process that any mission will have to pass before securing a berth on a rocket.

"These projects cross departments and majors, and students are starting as early as freshman year,” says Dr. Alex “Sandy” Antunes, professor of astronautical engineering. “They introduce real-world concepts in testing and meeting specs, often while (or before) students get those topics in class. It reinforces that successful projects are more about aptitude and learning to apply yourself, rather than a specific prior knowledge."

In short, reaching for the sky isn’t a one-shot operation. It happens in stages.